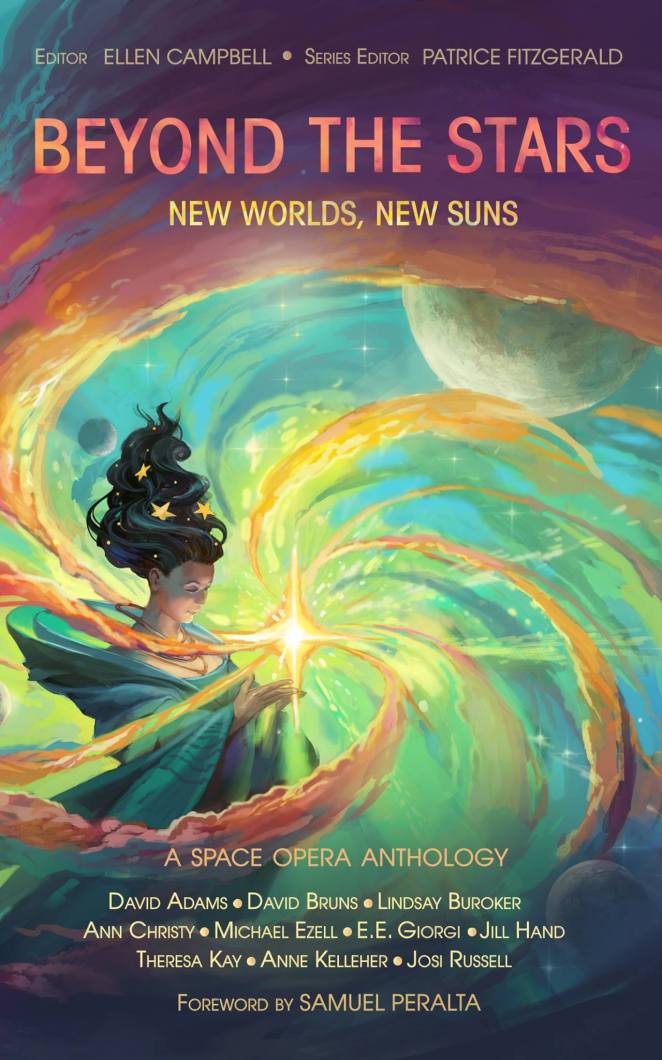 I received this ARC courtesy of the editor, Ellen Campbell (who I have known since I was a preteen, mad world).  Shoutout to Patrice Fitzgerald, the series editor, for all of her hard work as well.  You’ll find the authors all listed alongside the title of their story, I encourage you all to go out and support their projects too!

It was a bit daunting sitting down to read and review something to close to the heart of someone I know (and admire, she’s awesome) and I confess to much undue worry.  This collection was brilliant!  As in all anthologies some stories stood out more than others but none of them were anything less than intriguing and well-written.  I’ll give a brief synopsis of each story and then give a brief overall impression at the end.

Finders Keepers (David Bruns):  We meet Sabrina, captain of an all female crew on a ship somewhere in space.  She has two problems: 1) she introduced a man into the fray 2) she has found a ship she can scavenge for parts but it’s never that easy, right?  This was the perfect choice to open the anthology.  I really wasn’t sure what was going to happen and I found myself jumping to all sorts of (incorrect) conclusions.

Sequester (Ann Christy): Earth has been overrun by PePr’s (robot overlords come to mind) and a handful of humans on a crew trying to make Mars habitable for the remaining free people have reached an impasse.  This story fascinated me as the idea of Artificial Intelligence someday surpassing and potentially subjugating humankind seems to become more and more plausible.  Ann Christy did something here that made me really consider different notions of what it means to be human.  I look forward to reading the PePr series and delving into this world.

Escaping Eshwar (E.E. Giorgi): I’m a sucker for a young protagonist, so this one had me from the first paragraph. We meet Janhu, who is a 13 year old orphan trying to survive in a desolate world with only an android for company.  He dreams of flying away to safety and he has the intelligence and the determination to do it with his own two hands.  When he meets a mysterious woman who offers him an out, what will he do?

Anamnesis (Josi Russell): Kristi lives in a world where humans and “off-worlders” are not created or treated equal.  Drawn to a beautiful “space painting” and sympathetic to and curious about off-worlders, Kristi interested me more than the story unfolding around her.  We can all related to that feeling of unease that comes when you don’t quite seem to belong, it seems.  When she gets the chance to go off world even just for a minute, she takes it.  It changes her.

Hope Springs (Lindsay Buroker): Alisa is on her honeymoon at Hope Springs-a far flung moon-with her husband, her cyborg husband.  Determined to spend it soaking in the hot springs and not thinking about work, her plans are quickly thwarted by some Androids and a Petri dish.  Add a dash of comedy to the story and this is a fun little read.

The Patient Warrior (Michael Ezell): Jalad is tired of being oppressed by the Torq.  He stays connected to the ways of his ancestors at his own peril as his rage grows.  His people, the Nirut, have been trampled under the boots of their soft masters and exploited for their labor and resources for generations.  Will he find a way to overcome his feelings?  Patience.

Rebellion on Kepler-186f (Jill Hand): Eunice Clump is everything that scares me about the future of humanity, should be stay the current course.  She is incensed that her luxury craft has been diverted to stop the insurrection of a working class population on a planet in the middle of nowhere.  After reading that she couldn’t abide books because they ‘killed’ her husband, I loathed her.  When I discovered that the language on Earth had devolved into little more than l337 speak I knew that I’d seek out Jill Hand’s other work.

Solar Flare (Theresa Kay): Gretchen has abandoned the alliance fleet and ended up on some desert planet in a region known as “the desert”, so she knows she’s screwed.  She eventually finds sanctuary from the heat underground with a race known as the Dikurcidae, one of whom may help her escape.  This was the one story that was a bit too neat and tidy for me.  I kept waiting for something surprising to happen and when it didn’t I was disappointed.  Something in me detests catharsis these days so I can’t blame Kay for something easily explained by my own sensibilities.

Dear Sir or Madam (Anne Kelleher): Wrothgar Sergh is an alien attorney charged with defending planet Earth against a series of charges that will lead to its annihilation for crimes committed against other planets and galaxies.  Mary Beth is his Earthling witness for the defense at trial.  This story was super interesting in its look at how ignorance is not an excuse for the (sometimes horrible) things that result from it.

The Immortals: Southport (David Adams): A small squad of super soldiers in “immortal” suits are tasked with hunting down and exterminating The Myriad, a horde of alien super spiders.  As they seemingly get the upper hand, things inevitably get a little crazy.

This was a fantastic series full of unique ideas and excellent prose.  I plan to go back and read the previous installments as well as future pieces from the series and individual authors.  I strongly encourage anyone who wants to support indie science-fiction to snag this.  It’s a steal on Amazon!  Support independent literature, y’all! 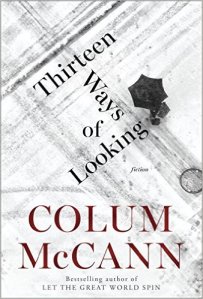 I received this ARC from Random House Publishing Group and Netgalley in exchange for an honest review.

I have read very few collections of short fiction in my life.  There isn’t any particular reason why, I just seemed to have jumped from board books as a child straight to novels.  It was the cover art and description of this book that drew me in, I had to read it.  This collection features one novella and three short stories, I enjoyed them all.  The title comes from a poem “Thirteen Ways Of Looking At A Blackbird”, a nod to how much of life is about perception.

The first story “Thirteen Ways Of Looking” is about an elderly man standing in the twilight of his life.  It flips back and forth between the immediate past and the present (after his death) told from his view and that of a commentator type narrator.  I didn’t want to like Mr. Mendelssohn at first, he seemed a combination of stereotypes but he grew on me.

I was born in the middle of my very first argument.

In brief snippets of his past and his musings on the present we get a clear portrait of man who has lived a good life, a life he is reflecting on.

And how is it that the deep past is littered with the characters, while the present is so housebroken and flat?

The second story “What Time Is It Now, Where You Are?” was my least favorite but still offered a few moments of clarity.  A journalist is writing a story on a deadline and he struggles to connect the pieces.

Out beyond the outpost, nothing but the dark and the white frost on the land.  The stars themselves like bulletholes above her.

The third “Sh’kol” really resonated with me, if only because of the title.

She had come upon the word sh’khol.  She cast around for a word to translate it but there was no proper match.  There were words, of course, for widow, widower, and orphan, but no noun, no adjective, for a parent who had lost a child.

A woman on the Irish coast is raising an adopted special needs child alone.  She wakes up one morning and he is missing.  Will he be found?  Will she glean anything about her life in the process?

The final story “Treaty” was truly touching.  An elderly Maryknoll nun sent for respite in Long Island.  A traumatic event in her life haunts her and the potential emergence of a villain spurs her to action.

She preferred to think and talk of other things, life in the village before she was captured, the volume of blue sky, the children in the schoolhouse, the fall of rain on the in roof…

I truly enjoyed reading these stories.  I found myself stopping to highlight and ponder often, bits and pieces of my own life coming to mind.  McCann is a gifted wordsmith, his framing of the concept of perspective a thing of beauty.  I have several people in mind already that I will personally recommend this collection to.

Sometimes it seems to me that we are writing our lives in advance, but at other times we can only ever look back.  In the end, though, every word we write is autobiographical, perhaps most especially when we attempt to avoid the autobiographical.  -Colum McCann